If you have lived in Montgomery County long enough, you may be familiar with the “Avenue of Faiths” on New Hampshire Avenue.

On this avenue, one may find mile after mile of houses of worship from a variety of different religions, denominations and cultures. Catholic, Protestant, Muslim, Buddhist, Hindu, and more are all represented along this section of highway that passes through bucolic suburbs of this diverse Maryland county.

These houses of worship are frequently used as the sites of one of my favorite things in Maryland – our cultural and ethnic festivals. These festivals give the opportunity for each community to celebrate its own culture and to showcase its own unique cuisine, music, dance, and art to others.

My wife and I make a point of attending one festival in particular each year, held at the St. Andrews Ukrainian Orthodox 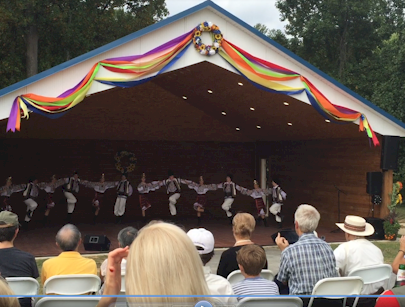 Church in September. Our favorites are the amazing Ukrainian cooking, such as borsch and golubtsi (stuffed cabbage), as well as the great folk music and dancing. While many attendees are obviously Ukrainian or perhaps of Ukrainian ancestry, it is so great to see many others who come from other backgrounds.

These numerous ethnic festivals represent one of the greatest things about the US -- different cultures celebrating and embracing each other, enjoying the freedoms and opportunities that we have that so many in this world lack. Attending some of these festivals each year is a great way to experience this amazing part of life in the US.

I heartily recommend you to consider going to at least one or two of these every year. For more information about the numerous Maryland heritage and cultural festivals, check out VisitMaryland.org.

She is a 68 year old grandmother from Eastern Europe. She came to my office with a timid smile on her face and a warm handshake. She was with her friend, a young man whom she called jokingly her “son” but was really her co-worker and fellow countryman who helped her with English.

Her problem seemed relatively simple. She had applied for naturalization with the US Citizenship and Immigration Services (“USCIS”) several years back, and somehow her case had got stuck somewhere in the governmental machinery. Normally, naturalization cases take 6 -13 months in Baltimore. Her case was already at the 3 year mark. She seemed eminently qualified for citizenship. Nothing in her background or current situation showed any reason why this had happened to her.

She had been back to the USCIS district office multiple times, and made numerous phone calls over the past three years, each time given the usual run-around. She had even used the help of her congressional representative’s office, but again with no luck. Always the answer was – your case is pending review.

I told her sometimes you need to push a little harder; sometimes these require the threat of a lawsuit. The law clearly states that naturalization applications need to be adjudicated within 120 days, or a petition may be filed in federal court, to give the court power to decide the case. So there was no question in my mind that she should be able to “get her day in court.”

Normally the recommended procedure is to submit a draft petition to USCIS with a letter informing them of the planned litigation, in the hopes that just the threat will “unstick” a stuck case.  That is what I did. At first things were looking up. Shortly after mailing the letter, I received a call from a USCIS attorney who assured me that the case was “on the radar” to be adjudicated by the 30 day deadline I had given in our letter. I told my client, she was overjoyed, as this was the most response she had seen from USCIS in the past 3 years.

After that however, the days ticked by, with no further contacts and apparently nothing happening. On the 30th day, I realized that the deadline was not going to be met. I had to speak with my client to discuss next steps.

She came to see me again, again with her friend. She was kindly and polite as before, but it was clear the stress was getting to her. “This is America” she said, “and things are run just like back in my old country.” She could not understand why this was happening to her -- an elderly grandmother, residing many years in the US, with not so much as a parking ticket in her record. And for her, this was not just a matter of being able to vote -- she was in poor health, with memory issues, still working a full-time job. She would have already retired, but had to keep working just for the health care, all because of this inexplicable delay in her processing.

I told her the next step would have to be to follow through on the threat of litigation. As I looked in her eyes, I could see the uncertainty and fear of taking that necessary step. Taking the government to court -- that was simply never even contemplated in her country when she grew up, and the mental roadblock of taking that step must been nearly insurmountable. Nevertheless, she didn’t say no right away, but asked if she could think about it and let me know in a week. That was two days ago.

When things go right for deserving clients, it can be an amazing feeling. Today I received a notice from USCIS that the case had been finally approved, and that my client would, at long last, be scheduled for an oath ceremony. My client would finally become an American.

The stakes might not have been as high as for others dealing with the legal system. She was not being freed from prison after a wrongful conviction, or winning a massive damage award after being injured by a drunk driver. But here was a woman who could finally retire, get the heart surgery she needed, and perhaps most importantly feel like she had been accepted into her adopted country.

This was the sort of day that makes me remember why I do this job. I look forward to sending her a card to congratulate her as soon as she gets her certificate, and welcome her as a US citizen.

Today, September 15, was AILA Citizenship Day. This is a single-day nationwide event hosted by AILA chapters across the country and their local grassroots partners. The goal is to assist permanent residents with their naturalization applications, provide eligibility screening, and to see if there are any "red flags" that might cause a problem for applicants down the road, all for no charge. I was honored to participate at the Chesapeake Multicultural Resource Center in Easton, Maryland, along with several other attorneys, paralegals and interpreters. Possibly due to the recent Florence hurricane scare, not as many people showed up for this great service as expected. Nevertheless I truly feel we were able to provide much needed information and assistance to those who did come. Now that the applicants have been screened for eligibility, the next step will be for the MRC staff to complete and file the naturalization applications. Hopefully, in just a short 12-13 months from now, each person we met today will be taking their oaths of allegiance to become some of the newest citizens of our country.  For more information, see https://www.aila.org/practice/pro-bono/find-your-opportunity/citizenship-day/become-a-citizen-find-assistance-in-your-community.